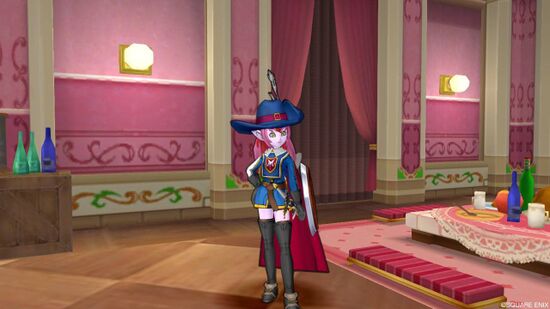 Female Elf in the Armamentalist outfit and pose

The Armamentalist (魔法戦士, Mahō senshi) is an excellent support vocation that has a variety of utility spells and abilities. Their unique Fource (フォース) skills allow them to do things such as change the elemental type of attacks, restore party member's MP, and even lower an enemy's elemental resistance. Initially, the beneficial Fource skills are single target, but they can be upgraded later to allow them to affect all party members, further increasing their utility. Armamentalists can equip swords, bows, heavy wands, and shields. It's recommended to use sword and shield for a more defensive role, or bows for their higher damage output. Heavy wands aren't recommended, since Armamentalists don't know many inherent spells to take advantage of the boosts a heavy wand grants. Their coup de grâce is Magic Roulette (マジックルーレット), which grants self and party members full MP recovery every few seconds for a short while, and a chance to boost damage slightly for a short while as well. Their vocation proof grants them a chance to recover a portion of damage dealt to an enemy as MP.

Being a more support oriented vocation, Armamentalists should focus on keeping buffs and debuffs up as much as they can. Use Oomphle on your physical attackers who need it, and Acceleratle to boost everyone's action intervals. When allies are getting low on MP, make sure to pay attention and use M-Pathy to quickly refill them. If you know the enemy's weakness, use the applicable elemental Fource ability to boost damage against it, although this is not urgent. The main ability you will want to make sure you keep up as much as possible is Fource Break, since it will reduce an enemy's elemental resistances by up to 100%, which is a pretty substantial boost to damage. Clock Charge you'll want to keep up too, since it will reduce the time of all allies' charge time skills and decrease their action intervals 2 stages. The last thing you can look out for is Magic Burst, which can deal a decent amount of AoE damage with the right buffs and setup. A good combo to use is wait until you get your coup de grace, activate it, and then use Magic Burst immediately after. This will of course drain all of your MP due to Magic Burst, but then instantly refill it due to the effect of Magic Roulette. Be careful not to be in a position where you'll die before the MP restore effect goes off, or you'll have died with 0 MP, and will have to spend a bit of time regaining it.

Only one of the two 200p skills listed above are able to be used at a time.

Retrieved from "https://ethene.wiki/w/index.php?title=Armamentalist&oldid=4756"
Categories:
Cookies help us deliver our services. By using our services, you agree to our use of cookies.