From Dragon Quest X
Jump to navigation Jump to search 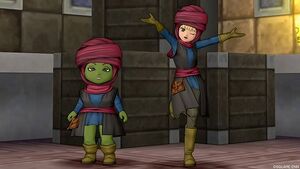 A Dwarf and Human in the Thief armor set

This is a page that will be used for information about the Thief class.

With the unique ability to place traps on the field, the Thief (盗賊 Tōzoku) is a unique feeling frontliner who has a repertoire of useful abilities including healing magic. They have access to Daggers, Whips, Claws, Hammers and Fisticuffs, including the exclusive skill tree: Acquisitiveness (おたから Otakara). Their access to Steal makes them great at getting items to sell for cash, and their ability to wear some light armor and wield weapons mean they can be on the frontlines without too much risk. Thieves love to get in and shower the enemy with mischievous traps and tricks while aiding their allies as speedy fighters with some utility.

Their coup-de-grace is Itemized Kill (お宝ハンター) it deals damage and can stun enemies for 15 seconds, and 100% probability on getting a common item drop after battle in addition to increasing rare item drops.

NOTE: Any skill with a（専）is an "exclusive" skill, meaning it only applies to the current class.

Retrieved from "https://ethene.wiki/w/index.php?title=Thief&oldid=3283"
Categories:
Cookies help us deliver our services. By using our services, you agree to our use of cookies.