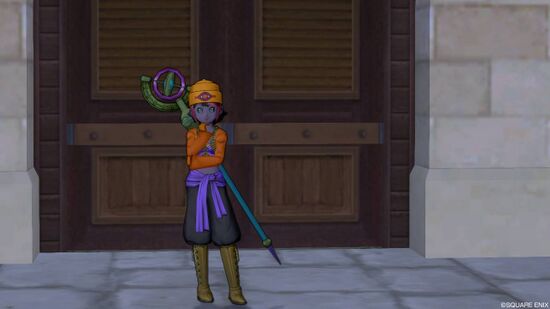 Female demonic Human in the Mage outfit and Pose

The Mage (魔法使い Mahou tsukai) is one of the starting vocations in Dragon Quest X and is primarily a damage focused vocation. It has low defense and low HP, but has the highest magical might and MP out of any vocation. Its main strength is the access to powerful Frizz and Crack spells. Mages shine very well in fights against enemies with high defense, since defense doesn't reduce the damage of spells. Their coup-de-grace is 0 Zone (ミラクルゾーン), which increases their spell damage and casting speed and causing all spells to cost 0 MP for a short duration. Their vocation proof grants them a chance to cast a second copy of a spell immediately after casting the first.

As a Mage, your main role is to effectively blast away foes from a far. If you were to spec into the dagger skill tree, you can get spells that poison the enemy, so long as they aren't material based enemies. It is heavily recommended to carry a heavy wand as your main weapon for casting, as with alchemy you can get its casting speed to increase as well as with 早詠みの杖 (Hayayomi no tsue) to increase your spellcasting speed for two minutes. Mages also get two skills that make use of their high magic damage, 超暴走魔法陣 (Chō bōsō mahōjin) which creates a magic circle that increases your critical hit chance by 50% and 魔力かくせい (Maryoku kakusei) which raises your attack power further by two levels for two minutes.

Mages can be extremely fragile, unlike their melee companions, but are also glass cannons in the fact that their high damage output will usually make up for it, so It is best recommended to collect accessories that increase your HP for a bit more survivability, possibly invest in a Gold Rosary to help you through rougher fights where the enemies use Area of Effect attacks often, and magic power increasing accessories to make your damage numbers go higher.

When starting in a battle, I once again can only recommend starting up with Hayayomi no tsue, then Maryoku kakusei, the reason I don't immediately recommend setting up Chō bōsō mahōjin is because of how the enemies aggro table works where they dont immediately have a target and will attack anyone. It's best to use this once you are certain you're not gonna be the first one to be attacked by the enemy. If you know the enemy is bound to use spells, it is best to either use マホトーン (Mahotōn) or マホカンタ (Mahokanta) as this will either prevent the enemy from being able to cast their spells, or reflect the spells back at the enemy. The second of the two being able to be applied to not only yourself, but to your fellow party members. Your main spell for casting unless the CT is finished is メラゾーマ (Merazōma) for Single Target or マヒャド (Mahyado) for AoE. Once the CT is finished, you can use メラガイアー (Meragaiā) for single target, being one of their strongest spells, or マヒャデドス (Mahyadodesu) being one of their strongest AoEs. Implying you have your 200 Skill Point quest done, it is highly recommended to use 超魔力かくせい (Chō maryoku kakusei) first as this will increase your damage limit. For example, if I were to use メラガイアー on a foe and it were to land 9999 damage, that is the normal cap, however, if I were to use 超魔力かくせい before casting it, the damage cap is lifted, and the damage can go as high as 19999 damage. If you don't have a party member that can redirect the anger of the enemy, be careful of potentially angering the target. It's for that reason that I recommend having a gold rosary so you'll at least have a chance to survive on 1 HP on the off chance the enemy has the strength to KO you.

Retrieved from "https://ethene.wiki/w/index.php?title=Mage&oldid=4750"
Categories:
Cookies help us deliver our services. By using our services, you agree to our use of cookies.