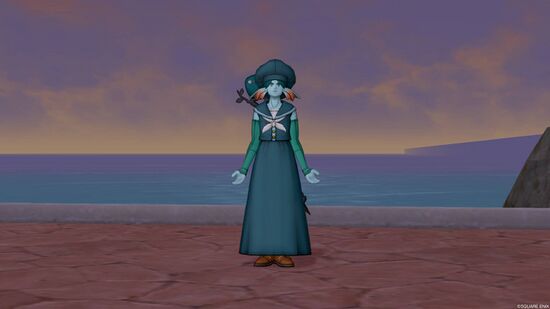 A Weddie in the Sage armor set

The Sage (賢者, Kenja) is a supportive vocation that can use both recovery and offensive spells. Sages have access to Heavy Wands, Bows, Boomerangs, Fisticuffs, Shields and unique skills for Fans. His exclusive skill tree is Enlightenment (さとり Satori). They're a vocation focused on casting spells, however their Magical Mending and Magical Might stats are lower than the ones from Priest and Mage respectively. They need to stay in the rearguard position because their defensive equipment are robes, and if one of them gets defeated, the course of a battle can change in a blink.

They can learn unique skills that will help to catch on with their Magical attributes, such as Caster Sugar, and in late game: Infinite Wisdom, both made to increase both Magical effects, the later being a evolved version of the first one. And Clear your Mind can erase all the good status effects on a enemy, it's one of the most useful skills for them. As a Sage, you choose your own path on the Magical area you want to focus (Offensive/Recovery), their most useful weapon to equip are Heavy Wands because of skills that can help you a lot for early game such as Faster Caster, and ones to increase the chance of casting Critical Spells by putting Magic Circles in the ground, especially if you're a Offensive-based Sage who likes to fight and use the power on spells such as Kazam (High dark damage), Kaboom (High light damage), and their evolved versions. If you don't like wands, you can also use Fans to increase the Magical Might stat just by equipping them or using skills such as Wind Slash Dance to increase both Magical Might and Attack power by 2 stages to your party. In the opposite side, a Sage who wants to focus on the Recovery side, will need to have Multiheal as one of the main spells in your list, plus, Sage's exclusive revive spell: Kazing, will help a lot in hard boss battles to revive your allies with full HP, and in the skills area: Right as Rain can automatically recover 20% of the damage received, and the evolved version Miracle Rain does the same but recovering 50%, for a minute. If you still equip Heavy Wands, Staff of Life is a amazing skill to help you by increasing your maximum HP by 200, to decrease the chance of losing the healer of the party.

Retrieved from "https://ethene.wiki/w/index.php?title=Sage&oldid=4758"
Categories:
Cookies help us deliver our services. By using our services, you agree to our use of cookies.