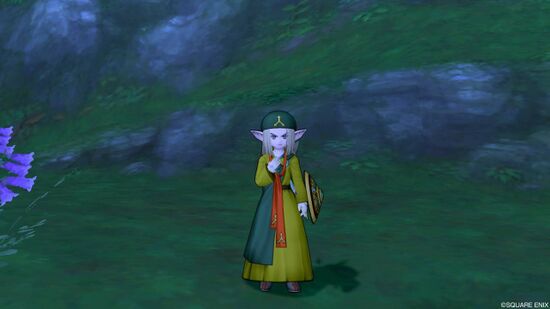 Male Elf in the Priest outfit and pose

The Priest (僧侶 Sōryo) is one of the starting vocations in DQX and primarily focuses on healing. With access to a wide range of status curing and HP restoration spells, as well as a few buffing spells, it is the best vocation for a pure support role. Its buffing abilities are not as great as that of some other support vocations such as the Minstrel or the Dancer, but it makes up for it by having extremely high magical mending-- it's the archetypal healing specialist vocation. They are capable of using Wands, Spears, Staves, and Shields, in addition to access to the vocation-exclusive skill tree Faith (しんこう心 Shinkō kokoro). Their coup-de-grace is Saint's Song (聖者の詩 Seija no uta), which revives all party members, recovers HP of all allies and self by about 50%, and cures any negative status effects for all allies. Their vocation proof allows them to occasionally survive a fatal blow with 1 HP.

In battle, Priests should almost always be playing a support role. They have very few capabilities when it comes to damage output-- they can equip staves or spears for better results but this will inevitably be detrimental in any kind of difficult content since it will take away from the defense and magical mending boon provided by the traditional wand and shield combination. In combat, a Priest's role should generally be staying away from enemies and making sure the party is taken care of. Healing should be top priority, and applying buffs should be next. Only when the necessary buffs are applied and your party is at full health can you focus on things like damaging or debuffing enemies. In terms of character/equipment build, Priests should prioritize HP above other stats as they naturally have low HP and keeping the healer alive is one of the most important parts of combat. Defense should come next, and then Magical Mending third (this is an important stat but normally the character won't need to be built to prioritize it as this vocation's magical mending is naturally very high), and the others can be up to your own discretion.

Priests have a special vocation-specific skill called Care Prayer (聖なる祈り Seinaru inori) which allows them to double their magical mending. This is an extremely useful ability and is one of the primary reasons Priests are quintessential to so many party formations. One of the first actions you should take at the beginning of any difficult battle is to make sure this buff is applied. Another important self-buff is the Grace of the Goddess (天使の守り Tenshi no mori) skill, which lasts until you die, where it will auto-revive you at 50% HP. However, this buff takes longer to cast and shouldn't be prioritized over healing a party member. Rapid Stick (ラピッドステッキ), a Wand skill, will reduce spellcasting time by 50% for one minute after use, but it does take time to recharge. Alma Mater (聖女の守り Seijo no mori) is important to apply to both allies and the self, as it will protect one time against an instant death attack (leaving the character at 1 HP), as long as the initial HP is over 50%. Divine Intervention (女神の祝福 Megami no shukufuku) does the same thing but allows the character to survive the deathblow regardless of initial HP. This skill, however, does take time to charge. The last "quintessential" skill (not necessarily required, but is useful in most battles) is Snap, Crackle, Poof (キラキラポーン Kirakirapōn), another wand skill, which will give any party member immunity to receiving negative status effects while the buff is in place.

A recommended flow for battle is to set up Care Prayer and Rapid Stick as soon as possible, but prioritize these behind immediately necessary healing. Grace of the Goddess should come next. Once you have these set up you can apply group buffs like Kabuff (スクルト) or Insulatle (フバーハ) depending on the strengths of the enemy. As long as your allies are doing fine and you have time to spare make sure to give yourself a Grace of the Goddess as early in the fight as possible because it will be an important buff later on in many battles, and it doesn't expire until death. If there is a more immediate threat of death then Alma Mater (on the one or two allies that need to stay alive) may be a better option. Multiheal (ベホマラー) is going to be your primary tool for healing, although for individual allies-- and depending on their remaining HP, Midheal (ベホイミ) or Moreheal (べホイム) will also be necessary. Priests actually technically have access to Fullheal (ベホマ) as a spell with charge time, although there are practically no situations in which it is ever necessary because Priests have naturally high enough magical mending that Moreheal will almost always be strong enough to restore any one ally to full HP. Besides healing, Priests should also be restoring status effects, although restoring a full party is a slow-ish process because the status restoration spells only target one ally at a time. Restoring HP should of course come before healing status effects. In this manner, a party member death should be seen as a status effect in terms of priority-- it is more important to keep the remaining party members alive than to possibly risk their death by reviving instead of healing. However, if the entire party is dead besides the Priest (a surprisingly common circumstance) then of course revival--and making sure you have a Grace of the Goddess buff--are both top priority.

Retrieved from "https://ethene.wiki/w/index.php?title=Priest&oldid=4749"
Categories:
Cookies help us deliver our services. By using our services, you agree to our use of cookies.